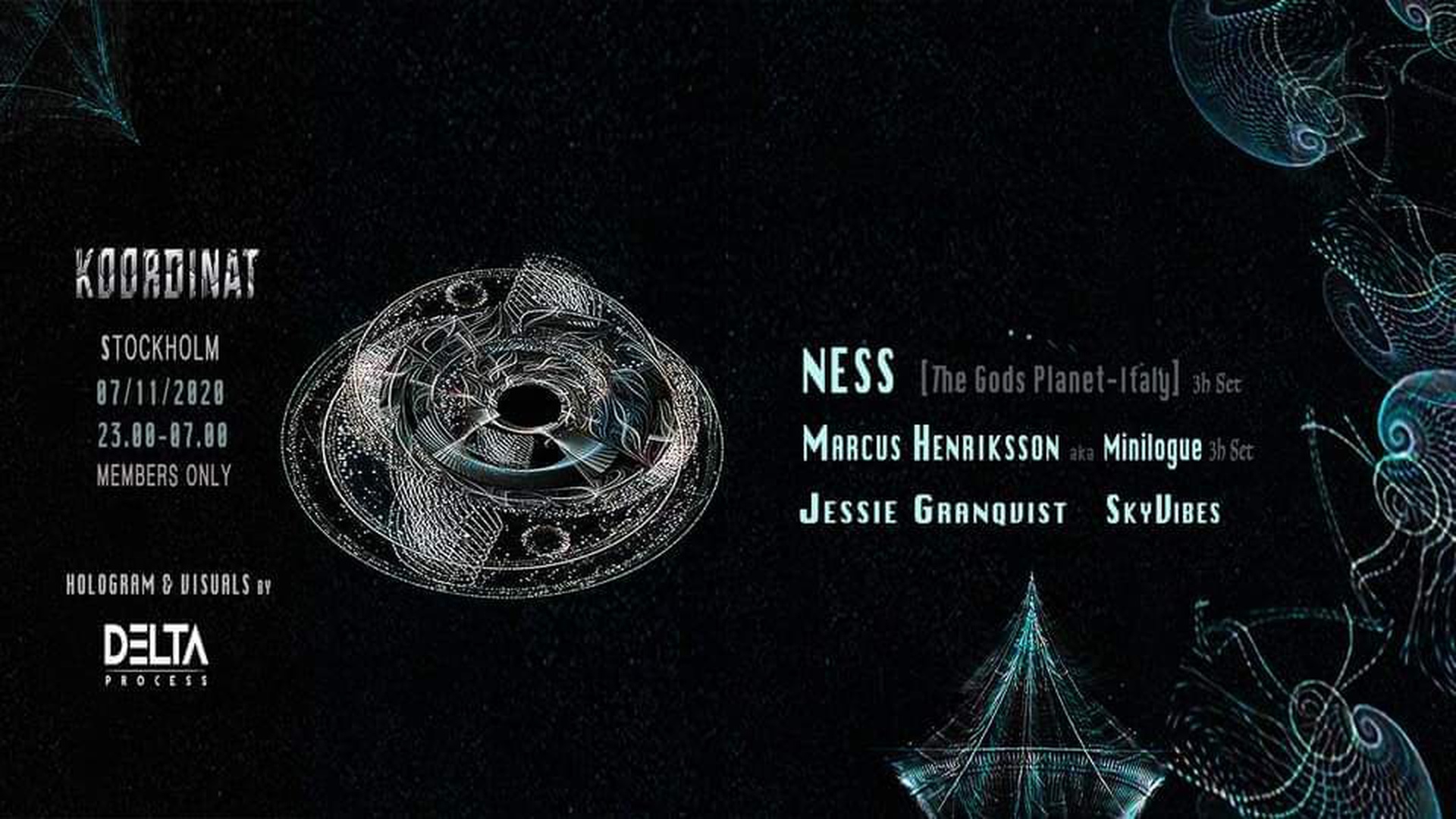 We are extremely excited to have one of the best
Visual team that Electronic scene has to offer!
#Hologram Show by:

with focus on
#Hypnotic #Deep #Dub & #Ambient soundsspaces!
Line up

facebook.com/Ness8Live/
We are proud to finally have #Ness ! Italian sound engineer, DJ & producer, & the head of (The Gods Planet) Records. Acknowledged for his style over a decade of Techno industry.
Ness gradually developed a distinct technique with a strong focus on atmosphere combined with hypnotic rhythms.
Having performed in some of the most relevant clubs and festivals all around the globe, he steadily releases music and collaborates with several renowned techno labels within the scene. His music & Dj sets are well accepted and defined as an exploration, a wide range of deep hypnotic techno and ambient soundscapes.
---•••---•••---•••---

facebook.com/marcushenrikssonpage
Marcus started his musical career as a Dj in 1993 & directly he fell in love with the Rave culture!
Also known as 'Son Kite & Minilogue'
his music can be best described as colorful, tribal, hypnotic touch in his opus, a truly borderline between Techno & Trance & ambient!
Nature, music, meditation, and his 25 years of experience in the dance music scene make him a unique artist of modern music & surely one of the pioneering of the underground scene!
Today Marcus is touring the world under his real name. Expressing music in all kinds of ways as a live artist and Dj.
Creating musical journeys not bound by styles or trends but with loving intention to inspire and ignite the spirit within.
He has released 6 albums and over 80 vinyl singles and toured the world since 1999. He has done many musical collaborations during the years; with artists such as Sebastian Mullaert, Karl Axel Bissler, System 7, Mathew Jonson, & many more.
---•••---•••---•••---

www.facebook.com/jessie.granqvist
One of Stockholms most talented & skilfully female-Dj, will build the dancefloor carefully before NESS!
Her Dj sets can be best described as
Hypnotic, Atmospheric face-melting, territories, with a healthy dose of acid & dub!
---•••---•••---•••---

www.facebook.com/Armin.SkyVibes
Armin aka SkyVibes, already a well-known name on the Psychedelic scene Now is ready to make his signature & story into the hypnotic Techno scene!
SkyVibes loves to play warm-up sets & will take care of the opening set.
---•••---•••---•••---
••• Crystal Clear Sound system •••
••• Amazing Venue •••
••• Friendly stuff with pure passion for the music-culture •••
.
.
.
( Members only ) that means we will only sell pre-sale tickets!
To be able to attend the event you need to become a member!
We will release the pre-sale tickets & the registration/membership link soon!
Stay tuned